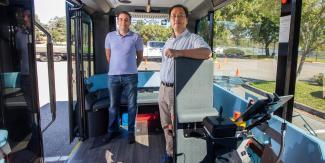 This article originally appeared on FAMU-FSU College of Engineering

Within a few years, humans may be sharing the road with autonomous buses that can move electrically and independently, without a driver. But are we ready?

Researchers at the FAMU-FSU College of Engineering are trying to answer that question with a new $100,000 multi-disciplinary study funded by the Federal Transit Administration (FTA). The 21-month Transit IDEA project is part of the Transit Cooperative Research Program, designed to foster innovative concepts.

Sungmoon Jung, a professor in civil and environmental engineering, is the principal investigator for the study that uses computer-based simulations to investigate crash risks. Jung is working with MohammedReza Seyedi, Ph.D., a post-doctoral researcher, in the study that will help the industry to make the autonomous bus safer.

“The benefit of multi-disciplinary research is that we can solve an important problem that one discipline cannot solve alone,” Jung said. “For this project, experts in autonomous bus operation and researchers in computational mechanics are collaborating to make the autonomous bus safer to the road users.”

Jung and Seyedi are looking at autonomous shuttle buses (ASBs) and vulnerable road users (VRUs), like pedestrians and bicyclists, and placing them in a series of simulations that identify high-risk scenarios. An automated shuttle bus runs without an operator in the range of 10 to 25 mph, typically operating on campuses and in downtown districts, where there are more pedestrians and bicyclists.

“Since these buses will operate in a dynamic environment, high-risk situations—caused by miscommunication between the bus and other road users or unpredictable pedestrian behaviors—must be identified and addressed prior to the implementation phase,” Seyedi said.

“A crash is the last thing that we want with regard to autonomous vehicles,” Seyedi said. “However, when crashes are unavoidable, we want to understand the consequences and quantify injury risk using computer-based simulations.”

The researchers are collaborating with the Jacksonville Transportation Authority (JTA), which developed the Ultimate Urban Circulator program. The goal of the JTA program is to transform downtown Jacksonville through modernization and expansion of the downtown Automated Skyway Express to accommodate Autonomous Vehicles (AV).

When will these driverless vehicles be on the road?

Jung and Seyedi believe we are currently in a transition stage from traditional transportation systems to full autonomy. They expect it may take two to three decades to reach that level fully driverless systems.

“One of the main goals of using fully autonomous vehicles is to achieve zero crash,” Seyedi said. “These technologies are still at their early stage, and measures must be taken carefully to address all the issues that can arise from vehicle or road use errors. In this field, crash occurrence has an extremely negative influence on public perception and could change the speed of development.”

IDEA programs are initiated by researchers and funding supports the initial testing of unproven concepts. The proposal is funded by the Federal Transit Administration (FTA) as part of the Transit Cooperative Research Program, a cooperative effort of the FTA, Transportation Research Board (TRB), and the American Public Transportation Association.