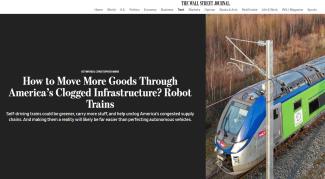 The RIDER Center's Dr. Maxim Dulebenets is leading the way in the burgeoning field of train automation. He was recently featured in the Wall Street Journal for his expertise in automation and rail transport and also published a literature review on the subject along with other RIDER members Prashant Singh and Junayad Pasha. The WSJ article cites Dr. Dulebenets as saying that "'We think that trains are going to reach full autonomy faster than vehicles,'” but that "The complexity of the U.S. rail network, where many lines are shared between multiple private rail companies, means automating our system could be daunting—a process that 'could take decades,'". His literature review on the subject adds that "Automation is expected to effectively address the growing demand for passenger and freight transportation, safety issues, human errors, and increasing congestion."