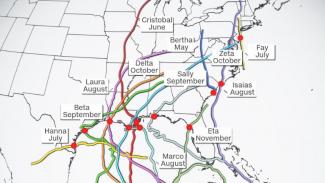 This article originally appeared on CNN.com

(CNN) People along nearly every mile of coastline from Texas to Maine have been put on alert this Atlantic hurricane season, as 12 of 29 storms made landfall in the United States in this record-setting year.

"Every mile of the US Gulf and Atlantic coast has been under a Tropical Storm or Hurricane Watch or Warning, except for one single county with coastline: Wakulla County, Florida," said Jake Carstens, meteorology graduate research assistant at Florida State University.

"Advisories stretched from Texas, where Hurricane Hanna and Tropical Storm Beta made landfall, all the way to Maine where Hurricane Isaias made a big impact up the East Coast," he told CNN.

"So far this year, 3598 of 3613 miles (99.6%) have been warned," tweeted James Franklin, the former chief of the Hurricane Specialist Unit at the National Hurricane Center. He factored in tropical storm and hurricane warnings -- issued when such conditions are expected -- as well as watches, which indicate conditions are possible.

When Franklin reran the numbers to include only tropical storm and hurricane warning areas, he found that 96.5% of the US coastline from Texas to Maine has been impacted in 2020, he said. That puts the 2020 season just behind the 2008 season, when 97% of the coastline was warned, he said.

Every month notches a US landfall

Texas had two landfalls, with Hanna in July and Beta in September. Louisiana had a record-breaking five landfalls this year: Cristobal in June, Laura and Marco in August, then finally Delta and Zeta in October. Alabama was hit by Hurricane Sally in September. South Carolina was hit by the pre-season storm Bertha back in May.

Despite most of these storms hitting the Gulf Coast, the Northeast was also impacted by three named storms -- Fay, Isaias and Zeta. Tropical Storm Fay was the only storm to make landfall in the Northeast, hitting New Jersey on July 10. Hurricane Isaias, which made landfall in North Carolina in August, triggered a huge swath of power outages along the East Coast.

Remarkably, Florida made it almost to the very end of this hurricane season before finally having a landfalling storm. Eta became the first November landfall for Florida since Mitch in 1998. And since Eta made two landfalls in Florida, it added to the many miles of coastline under tropical alerts this season.

Storm impacts often stretch far beyond where a storm runs aground, said Carstens, offering some examples in his state.

"It's worth noting that despite Florida seeing a bit less of the action compared to other states like Louisiana, landfall locations don't fully describe the range and extent of impacts," he said.

"Isaias nearly clipped the east coast of Florida and prompted Hurricane Warnings in South Florida for a time. Sally brought flooding and tornadoes to much of the Florida Panhandle, and came awfully close to tropical storm strength in its early stages when it hit Miami-Dade County."

"Even Marco," Carstens added, "which weakened significantly before landfall in Louisiana and barely hung on as a tropical storm, produced 10 inches of rain in parts of the Panhandle. Florida made it through much of the year without a direct hit, but it has still felt impacts from several storms, and continued a period of busy tropical cyclone activity for the state since 2016."

And while the Atlantic hurricane season does not end until November 30, Mother Nature does not always follow a calendar. In 2005, a low pressure system formed on December 28, becoming Tropical Storm Zeta (the only other year to use the Greek alphabet) just two days later.

Monica Garrett and Taylor Ward contributed to this article