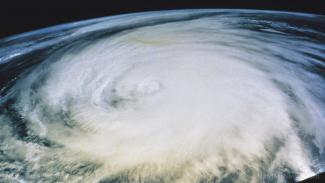 This article originally appeared on Environ.News

A study published in the Geophysical Research Letters suggests that hurricanes or even just really strong storms can trigger seismic events called “stormquakes” in the nearby ocean.

Researchers from Florida State University (FSU), the University of California, San Diego and the Woods Hole Oceanographic Institution in Massachusetts analyzed more than a decade of seismic and oceanographic records. They found a strong correlation between certain hurricanes that hit the U.S. and intense seismic activity in the nearby seabed.

“The exciting part is seismic sources caused by hurricanes can last from hours to days,” added Fan.

The researchers were able to identify stormquakes by looking at the fuzzy seismic signals produced by interactions between the ocean and solid earth. These signals are typically thought of as background or ambient noise and therefore commonly disregarded. It turns out, however, that some of these signals represent seismic activity.

“We can have seismic sources in the ocean just like earthquakes within the crust,” said Fan.

According to Fan, stormquakes happen when hurricanes or nor’easters (storms along the East Coast) transfer energy into the ocean as strong ocean waves. The waves interact with the solid earth and produce seismic events as strong as a 3.5 magnitude earthquake.

When the team further examined low-frequency earthquakes, they found that stormquakes are strongly influenced by local oceanographic features and seafloor topography, such as large continental shelves and ocean banks. The researchers developed a technique for detecting seismic events and determining whether these events are stormquakes. For instance, a seismic event must occur during a stormy day and in areas with those geophysical features.

After examining seismic and oceanographic data from September 2006 to February 2019, the researchers found evidence of more than 10,000 stormquakes from that period. These quakes occurred in the Gulf of Mexico in the U.S. and offshore of New England and Florida, as well as offshore of Nova Scotia, Newfoundland and British Columbia in Canada.

One productive hurricane was Hurricane Bill. Bill produced more than 300 stormquakes when it hit North America in August 2009. It originated from the Atlantic ocean and strengthened into a Category 4 hurricane before weakening as a Category 1 hurricane when it made landfall in New England. Upon Bill’s arrival, there were numerous seismic events off the coasts of New England and Nova Scotia, where transcontinental surface waves temporarily increased.

Hurricane Ike in 2008 also triggered seismic activity in the Gulf of Mexico, as well as Hurricane Irene in 2011 in the Little Bahama Bank off the coast of Florida. (Related: “Weather wars” theorists claim Hurricane Harvey was engineered, “steered” toward Houston as a “weather terrorism” weapon.)

However, the researchers noted that not all hurricanes can trigger stormquakes. For instance, Hurricane Sandy, one of the costliest storms on record in the United States, did not generate seismic activity. The team said that whether a hurricane or storm can produce stormquakes depends in part upon the geophysical features of an area. For example, the coastal region from New Jersey to Georgia did not show signs of a stormquake but other regions like the Gulf of Mexico in the U.S. are hotspots.

These findings, according to Fan, underscore the richness of the seismic wave field and indicate that geologists are reaching a new level of understanding of seismic waves. Still, Fan said that more work needs to be done.

“We have lots of unknowns. We weren’t even aware of the existence of the natural phenomenon,” Fan said.